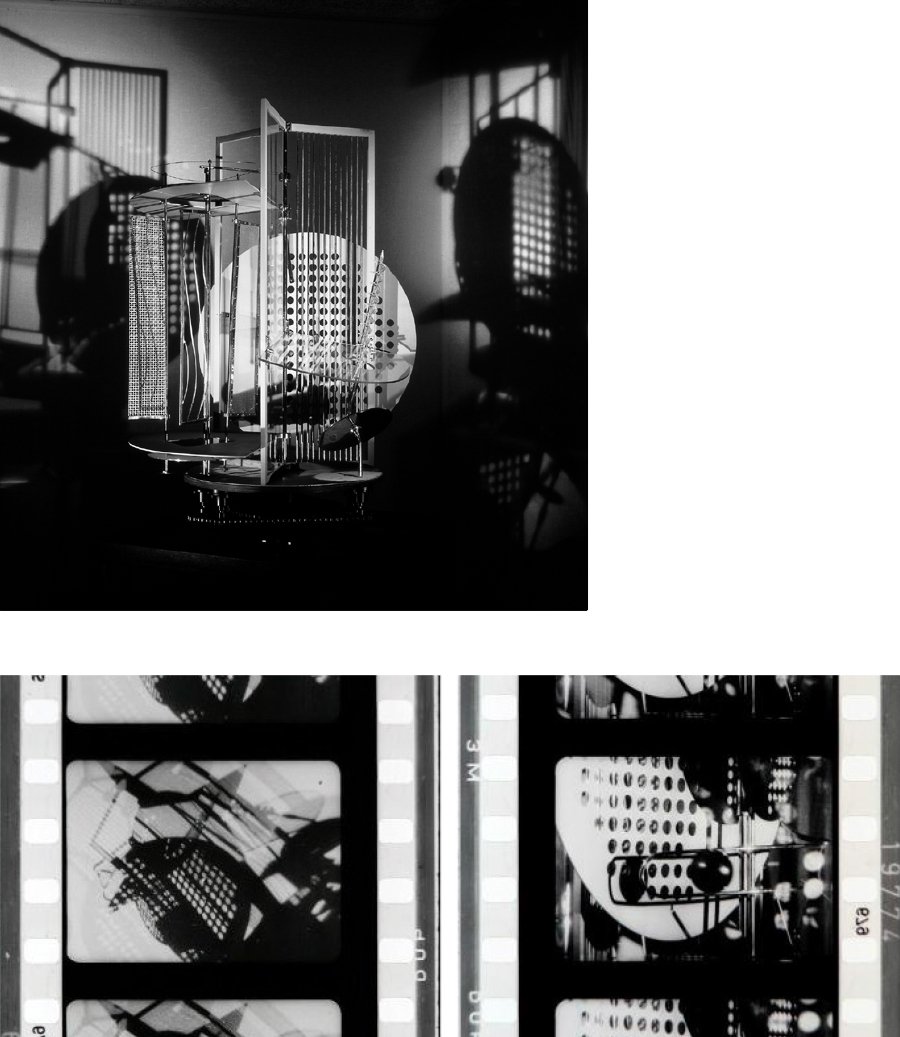 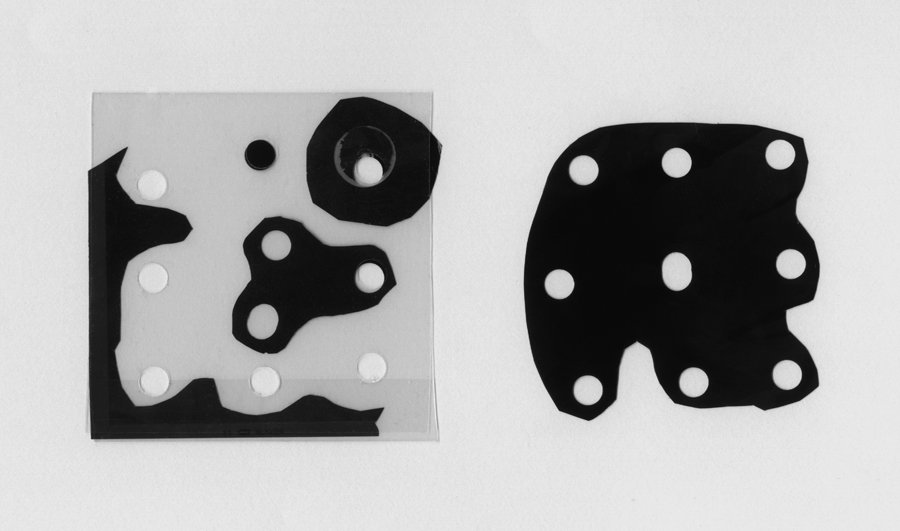 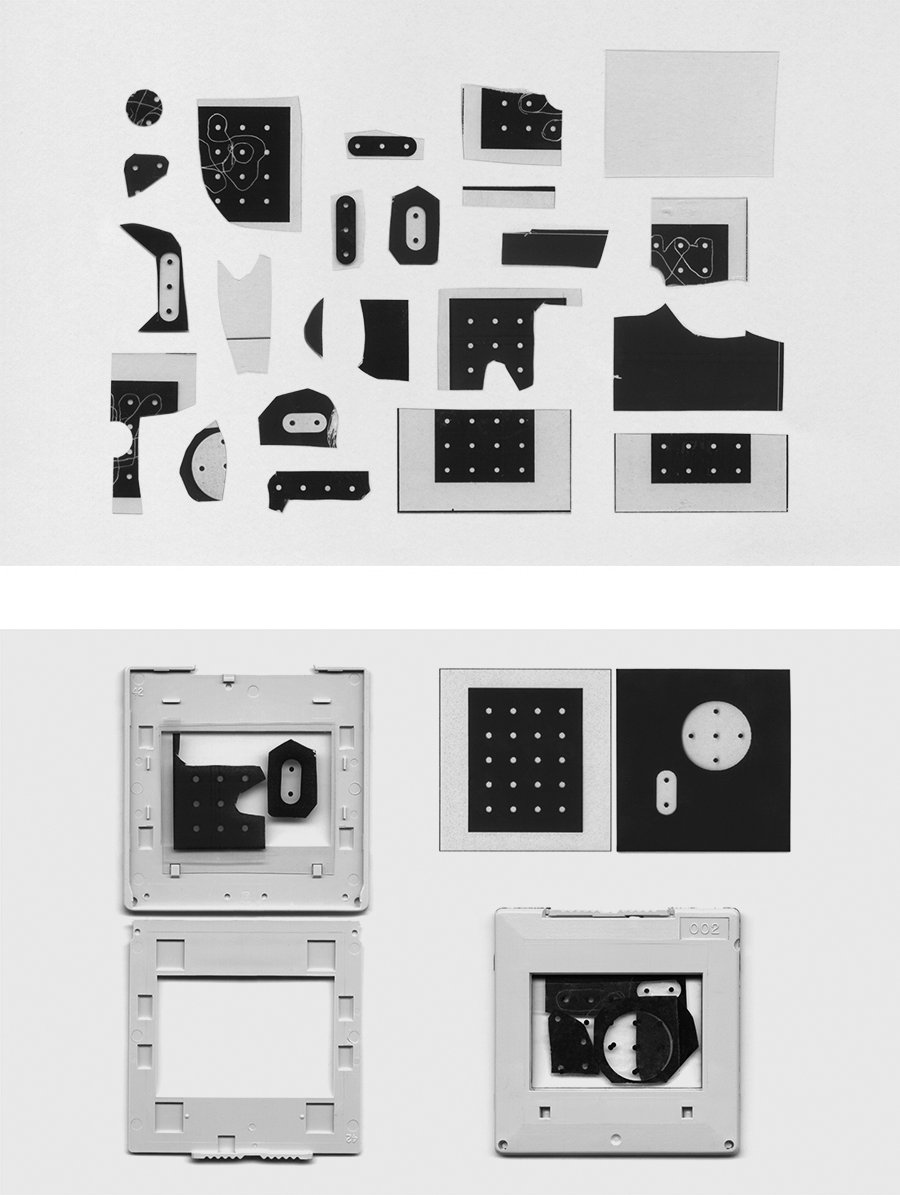 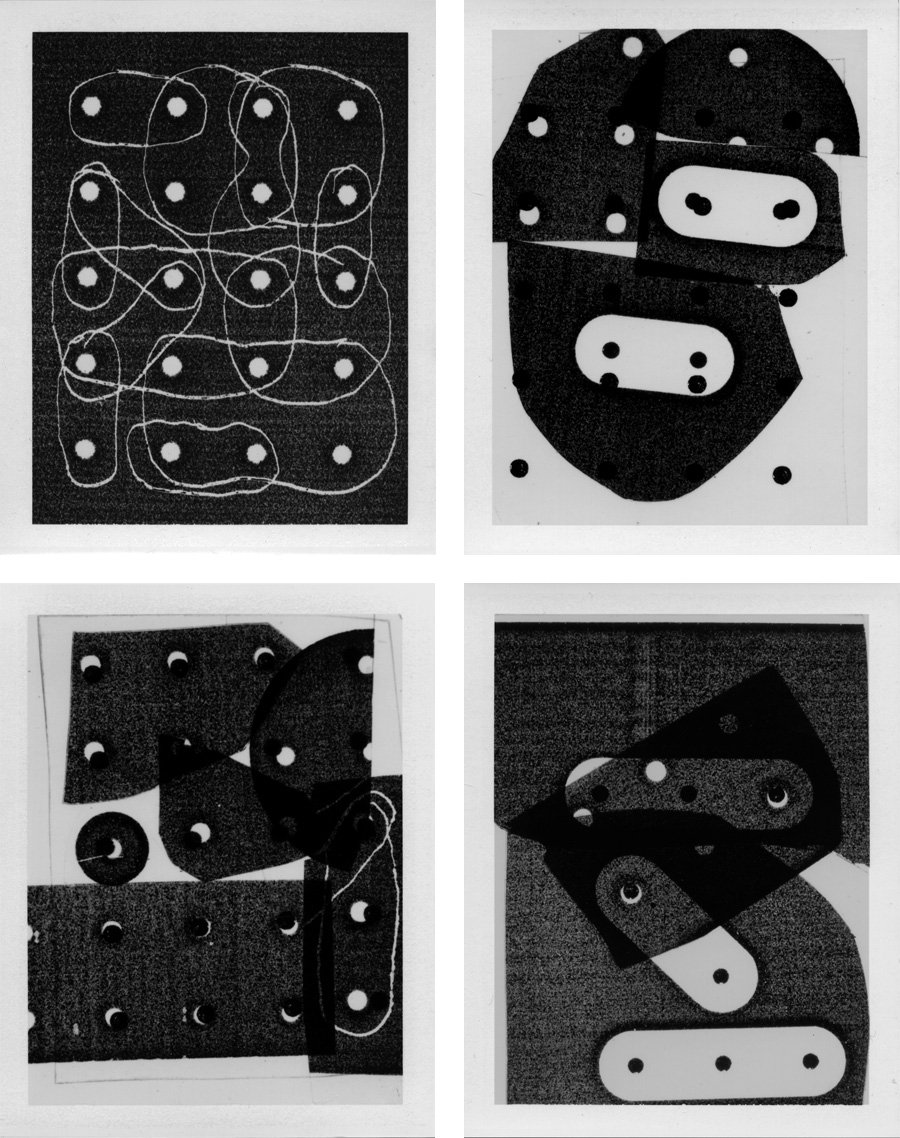 Above: coloured pen on laser print, 2012. Below: first set of modules designed for Mona typeface, 2012. 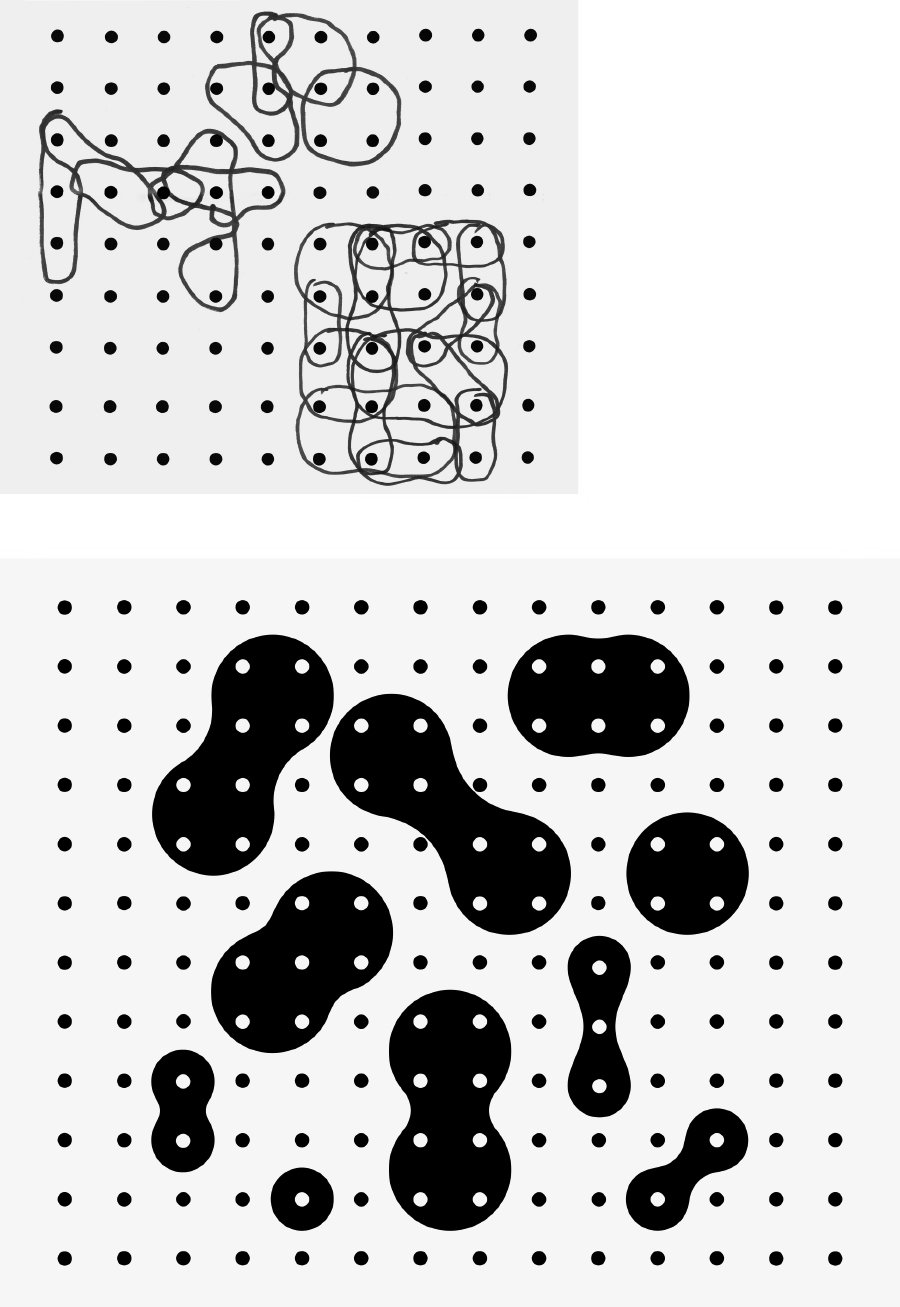 Letters from the first version of Mona. Above: vector drawing. Below: laser print transferred to slide, projected on Polaroid paper, 2012. 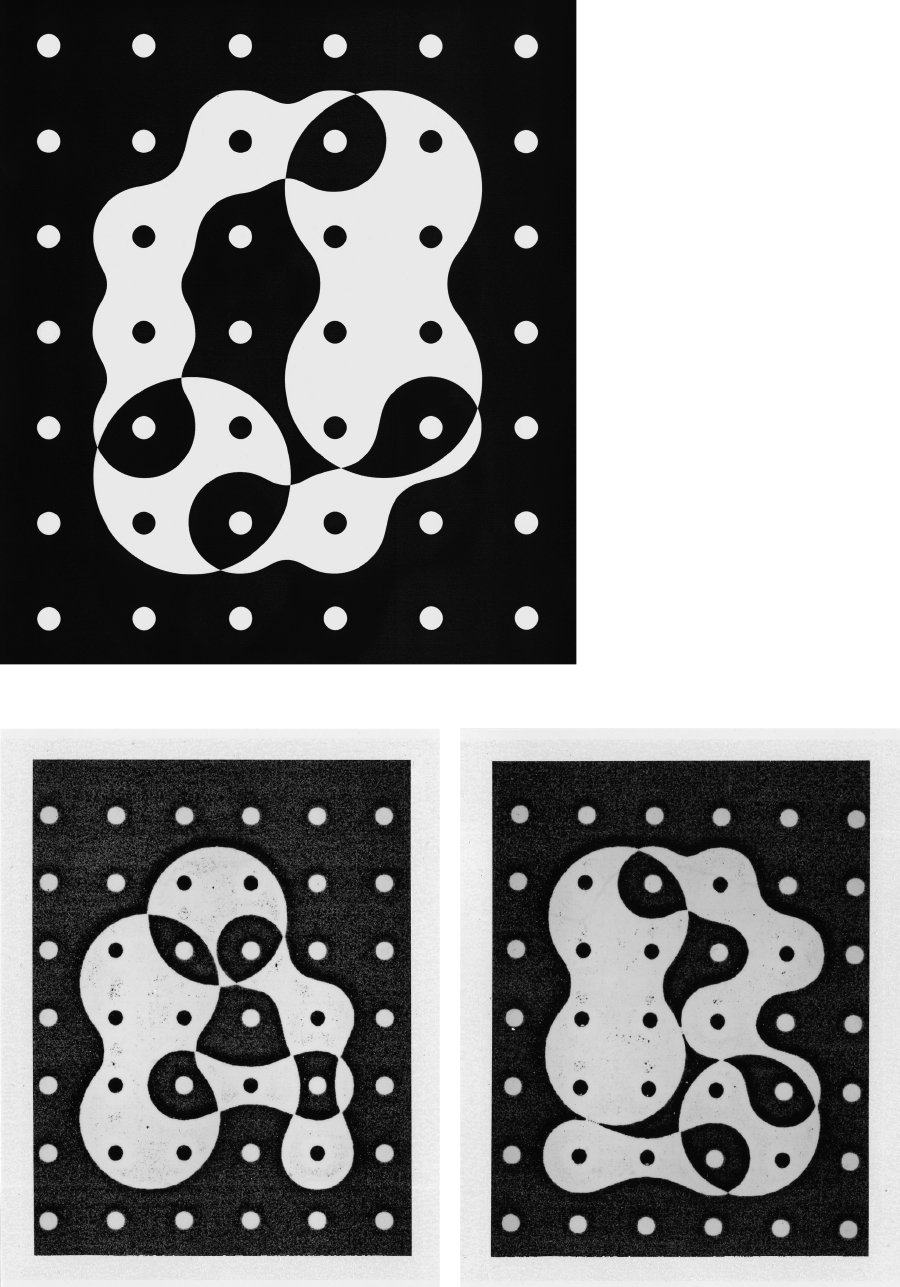 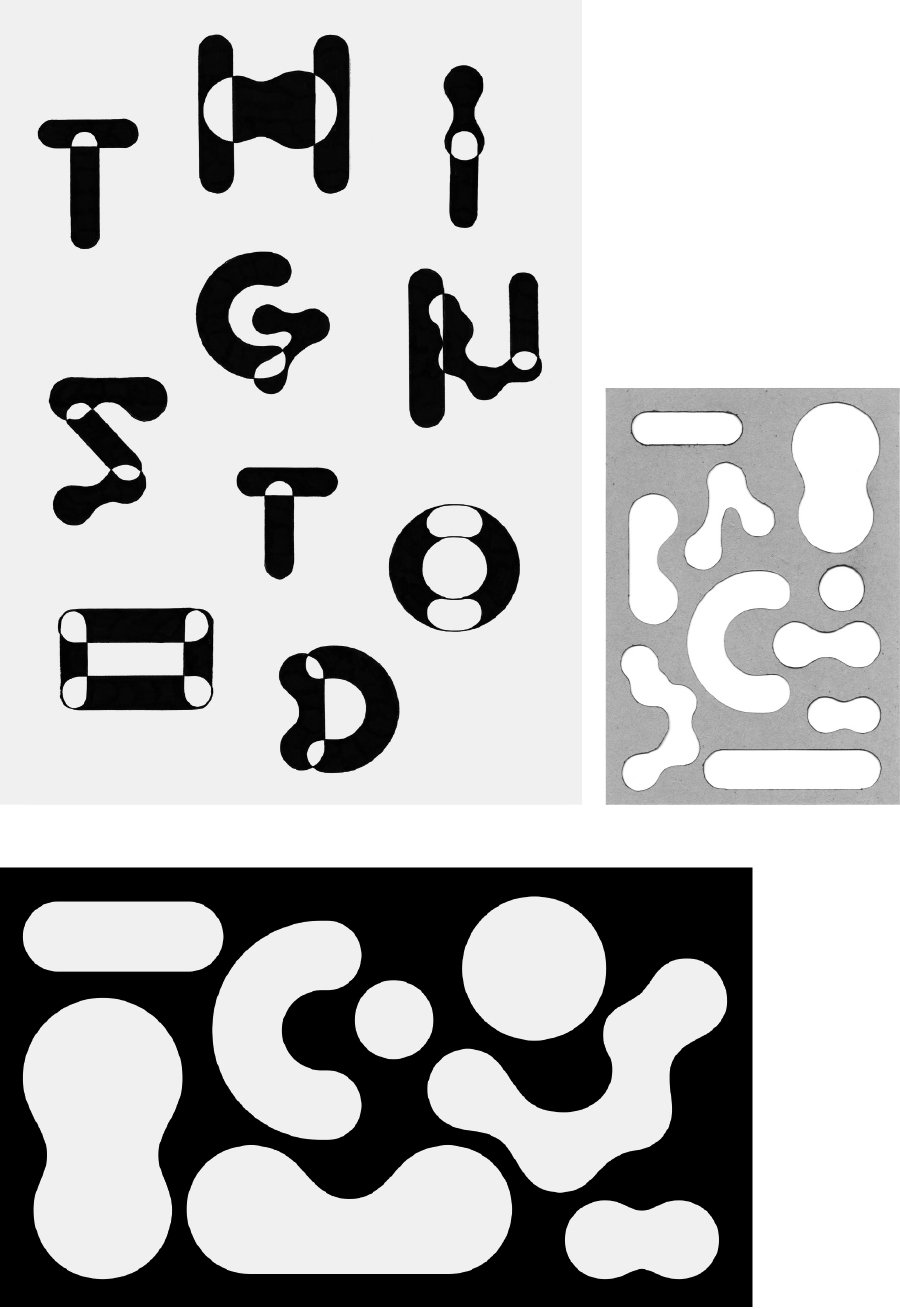 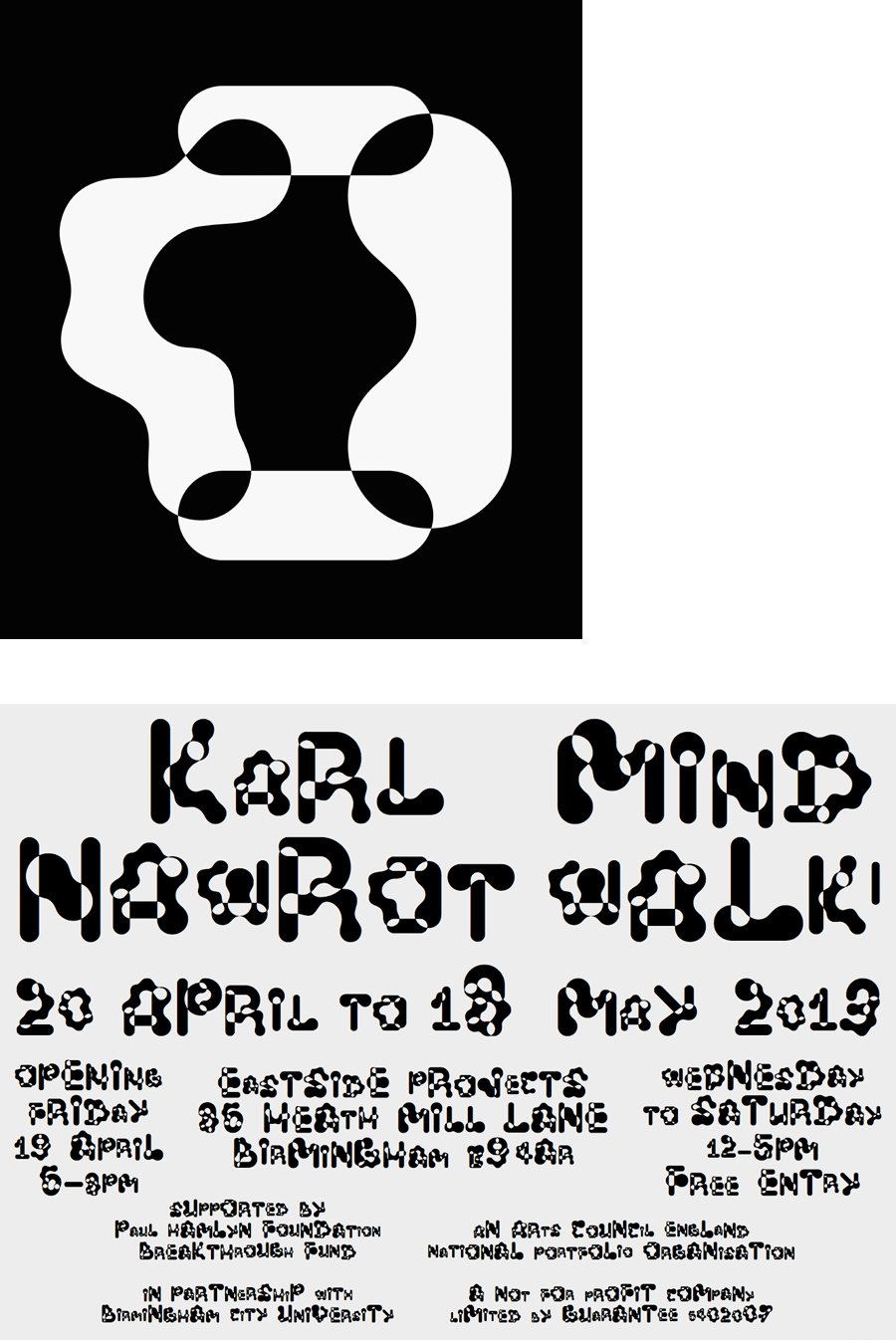 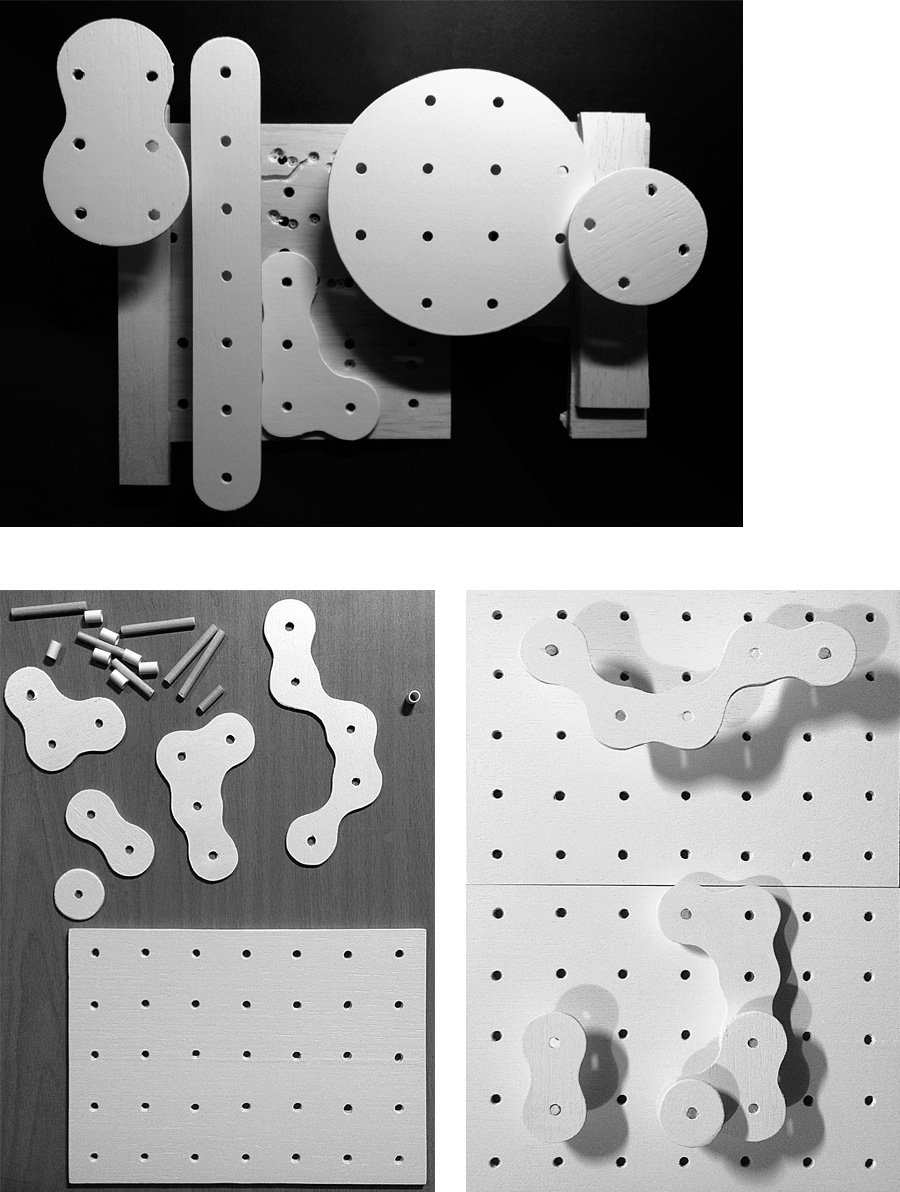 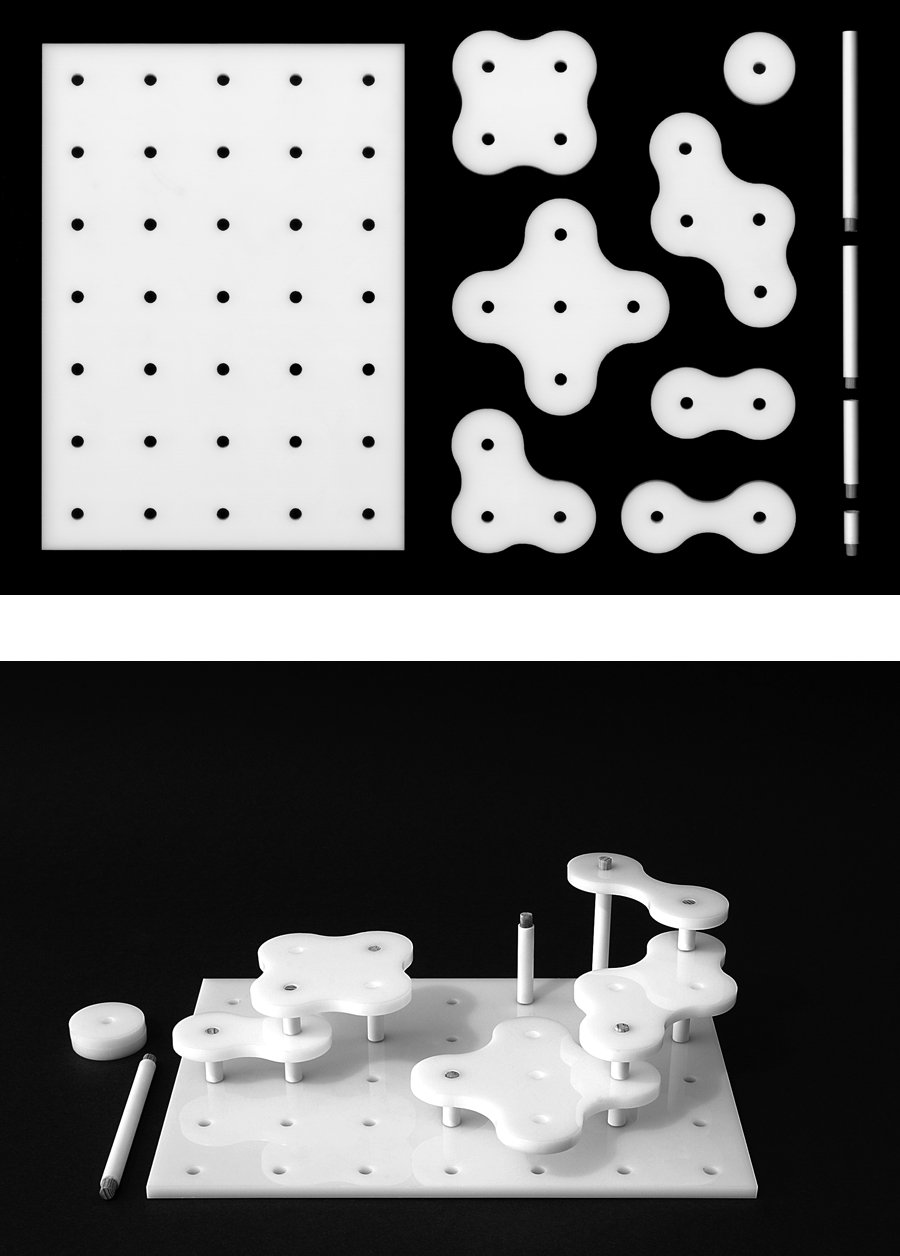 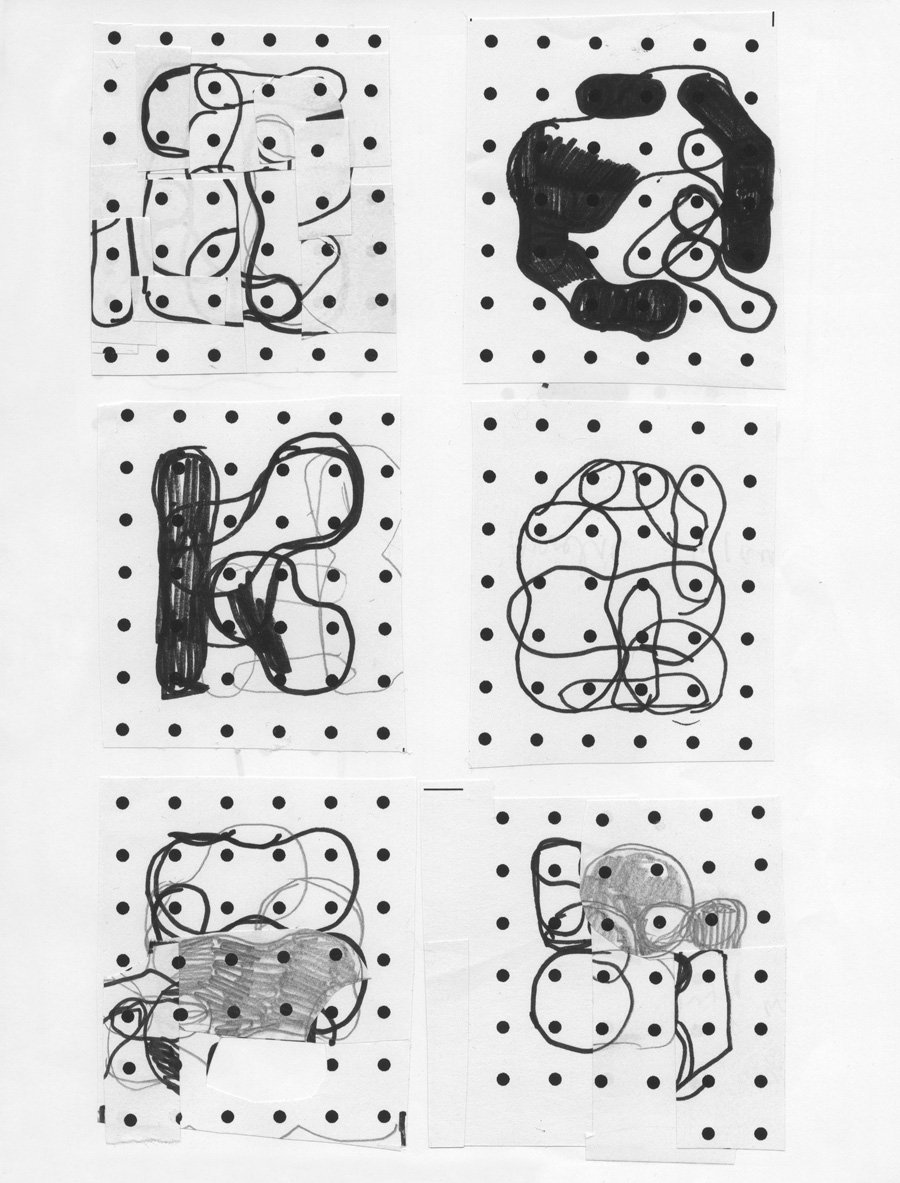 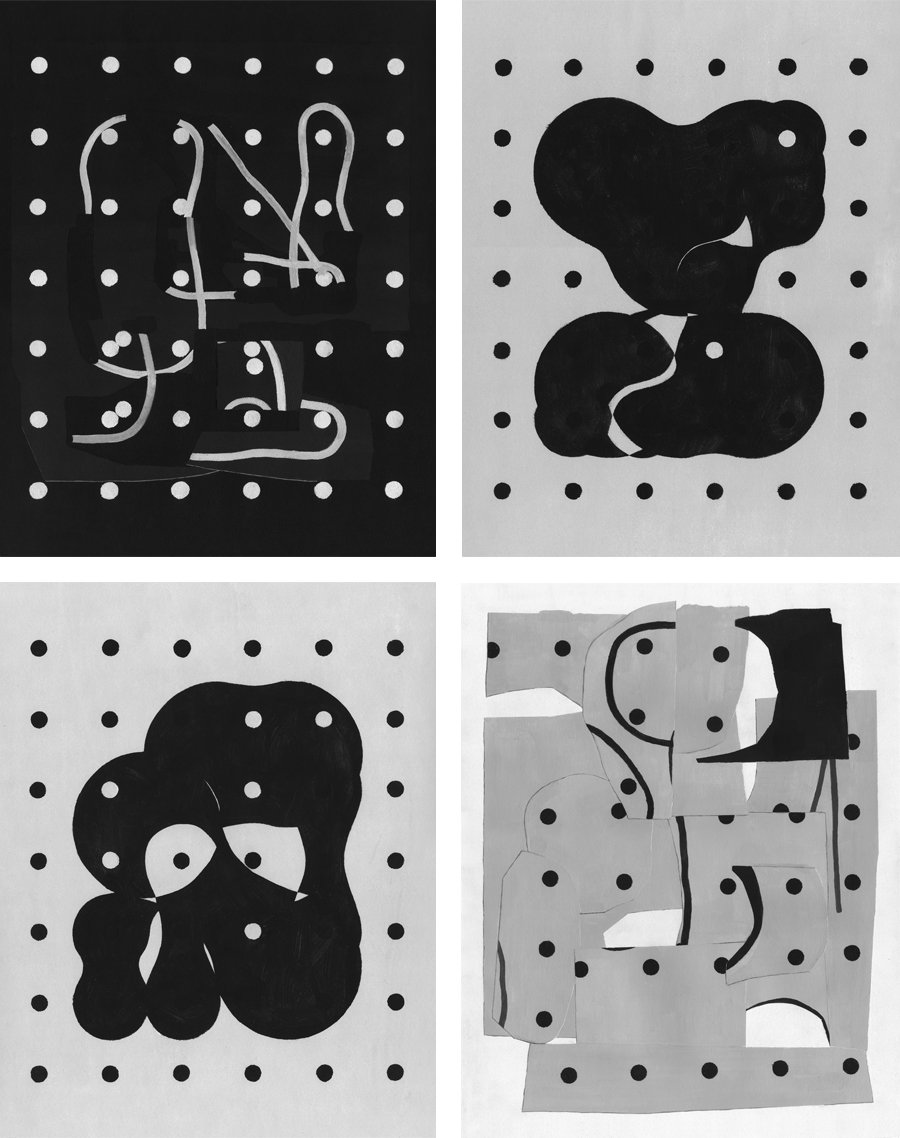 The typeface that would become Mona was commissioned by the design studio Our Polite Society (NL/SE) in 2011, as part of a graphic identity for the Bauhaus Dessau Foundation.¹ Four designs were produced, each loosely based on the work of a Bauhaus figure.² Mona takes its circuitous inspiration from the Hungarian artist László Moholy-Nagy.

The process began with a series of small collages referencing Moholy-Nagy’s 1926 film A Light Play: Black-White-Gray, which features a curious device of his making: the Light-Space Modulator. [1 2] Forms were drawn, scanned, printed onto transparent film, cut up, mounted into 35mm slide cases, and projected onto Polaroid paper to make prints with a rough, textural quality. [3 4] Taking constellations of abstract forms generated by this photographic experimentation, some first glyphs were drawn, imposed onto a dotted mesh derived from the visual effect of dust specks illuminated by Moholy-Nagy’s device. [5 6] Iterative work followed, and a provisional version of the typeface, finally without its supporting mesh, was completed in 2012. [7 8]

Work on Mona resumed in 2013. The mesh was reinstated as the base for a primitive typewriter, or Ghost(s) Writer,³ constructed in painted wood and plastic. [9] Existing as both sculptural object and drawing machine, the Ghost(s) Writer was used to generate new line-drawn glyphs, whose overlapping forms follow a modular logic. Each point in the mesh is the centre of a potential rotational movement. [10]

In 2020 this machine was revisited, updated, and used to complete the full set of Mona’s glyphs in two styles: with and without the visible mesh. [11 12]